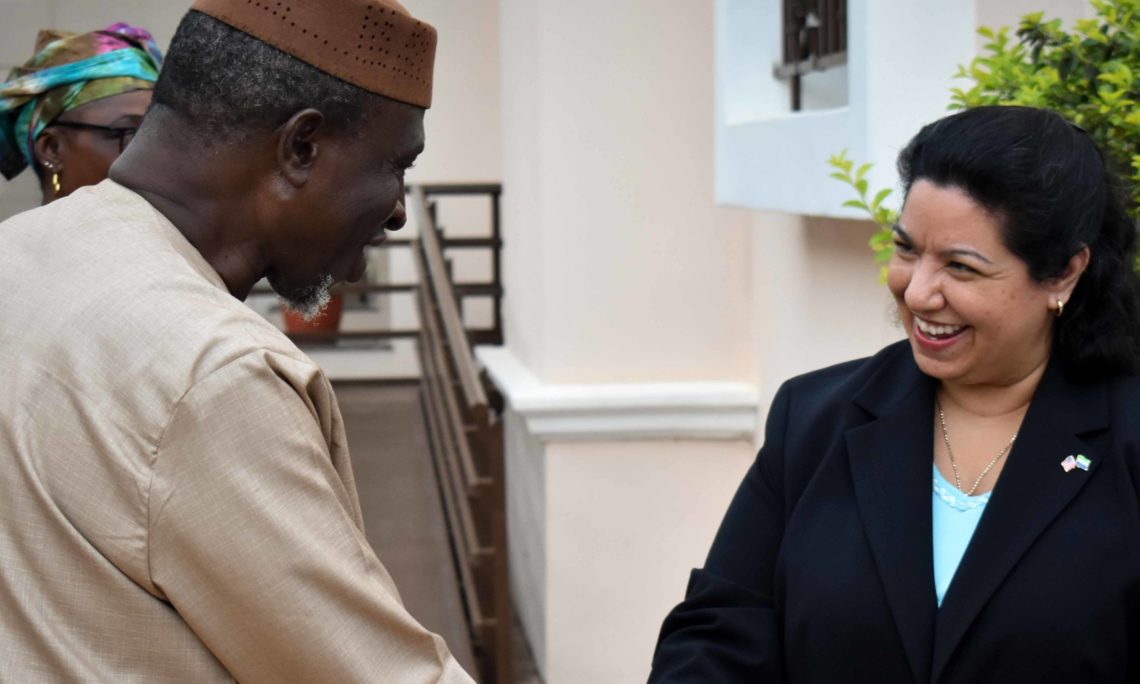 On June 7, 2018 U.S. Ambassador to Sierra Leone Maria Brewer, in cooperation with the Chief Imam of Freetown Municipality, Sheikh Abubakarr Conteh, hosted an interfaith Iftar at her residence. “On behalf of the people of the United States, I extend my warmest wishes to all Muslims in Sierra Leone. I hope that we are all blessed with the joys of family, peace, and understanding,” she said.

PAPER  PRESENTED AT THE IFTAR AT THE RESIDENCE OF THE AMERICAN AMBASSADOR TO SIERRA LEONE ON THURSDAY 7TH JUNE 2018.

THE VALUE OF RELIGIOUS TOTERANCE

“In the name of Allah, Most Gracious, Most Merciful.  I bear witness that there is no God worthy of worship but Allah Subuhannah Watallah and that Prophet Muhammad is his slave and messenger.  May Allah’s blessings be upon all his Prophets and all of us here this evening. May we all share in Allah’s blessings, mercy, and forgiveness during this holy month of Ramadan. Ameen.

History tells us that there was a lot of religious intolerance when the world witnessed the period of the crusades.  People were killed because of their religious beliefs.  Religious tolerance was then regarded as unreligious.

Let us ask ourselves, what is tolerance?  The concise Oxford Dictionary defines tolerance as the ability, willingness and capacity to allow the existence or occurrence of something that one dislikes or disagrees with, without interference.  As a concept, tolerance means “respect, acceptance and appreciation of the rich diversity of world’s cultures, forms of expression and ways of being human.”

Tolerance is a basic principle of Islam.  It is a religious moral duty of every Muslim to be tolerant to peoples of other faiths.  Being tolerant does not mean weakness, concession, condescension, or indulgence.  It does not mean lack of principle.  Tolerance according to Islam does not mean that we believe that all religions are the same.  It does not mean that we do not believe in the superiority of Islam over other faiths and ideologies.  It does mean that we spread the message of Islam to non Muslims with the aim of bringing them to Islam, in a manner prescribed by the Glorious Quran.  The Quran says very clearly (To every people have we appointed rites and ceremonies which they must follow. Let them not then dispute with you on matter, but do invite them to your Lord, for you are assuredly on the right way.  If the deny you say “Allah knows best what it is you are doing. Allah will judge between you on the day of judgement concerning the matters in which you differ’ (Al Hajj 21:76-79)

Our Prophet’s PBUH attitude to the Jews and Christians, whom the Quran refer to as the people of the book, was one of kindness.  He gave the Jews of Medina precisely the same treatment as he gave the Muslims as long as the remained peaceful.  He was never aggressive against any man, or class of men, never penalized any man, or made war on any people on grounds of their belief.

Tolerance comes from our recognition of:

The Quran teaches us the basic dignity of all human beings and our Prophet PBUH was a respecter of persons. Sharia recognizes the rights of all human beings to life, property, family, honour and conscience.  These principles I dear say are in fact entrenched in the constitution of Sierra Leone.

Equality of all men and justice to all cannot be overemphasized in Islam. These values cannot be upheld and practiced without tolerance.  The Jews and Christians are mentioned severally in the Quran which confirms its   principle of freedom of belief.  It is clearly stated in the Quran that there shall be NO coercion in matters of faith and belief. Sura Baqarah verse 256 states “There is no compulsion in religion.”

There is a sura directing Muslims how to treat people who do not believe in God and worship things other than God or ascribe partners with God.  Sura 109 Al Kafirun was revealed to Prophet Muhammad PBUH in Makka in which Allah defined the right attitude to those who reject faith in matters of truth.  We make no compromise but in the same vain, there is no need to persecute or abuse anyone for what he or she believes.  Verse 6 of this sura says, “To you your religion and to me my religion.”  In Sura Ash-shra 42, verse 48. Allah says to the Prophet, “If then they turn away, we have not sent you as a guard over them.  Your duty is but to convey the message.”

Again in Sura 16 Al Nahl verse 125, Allah says “invite all to the way of your Lord with wisdom and beautiful preaching, and argue with them in ways that are best and most gracious.  Your Lord knows best who have strayed from the path and who receive guidance.”

To quote more verse from the Quran, Allah in Sura Nur  verse 54 , commands the Prophet PBUH  “Say obey Allah and the messengers , but if you turn away, he is only responsible for the duty placed on him and you for that placed on you.  If you obey him, you shall be on right guidance.”  The Messenger’s duty is only to preach the clear message.

All these verses and others, give clear message that Muslims should not coerce people to follow the religion of Islam.  They present the message in the most cogent and clear way, invite them to the truth, and it is up to them to accept or reject the message.

With the above discussion, you might be asking the question, but why do Muslims make Jihad?  Jihad is wrongly referred to by the West as “Holy War.”  Jiihad in fact means striving or struggling in the way of Allah. Muslims make Jihad to remove injustice and aggression.  Allah wants Muslims to show kindness and deal justly with non Muslims as long as they do not fight them in their religion and or drive them from their homes.  Allah says in Sura Baqara verse 190 “Fight in the cause of Allah those who fight you but do not transgress limits, for Allah loves not the Transgressors.  Islam therefore teaches zero tolerance for injustice, oppression and violation of human rights, for all humans are regarded equal in the sight of Allah, only your piety makes you higher than the other and Allah knows best.”

The value of tolerance generally and religious tolerance in particular cannot be overemphasized. There should be tolerance at all levels, starting from the home to the state be it individuals or groups… It is the mechanism that upholds human rights, pluralism and the rule of law.

I do hope this short talk has been educative and enlightening. I want to thank again the American Ambassador and team for hosting us for Iftar. Ramadan Mubrack.”