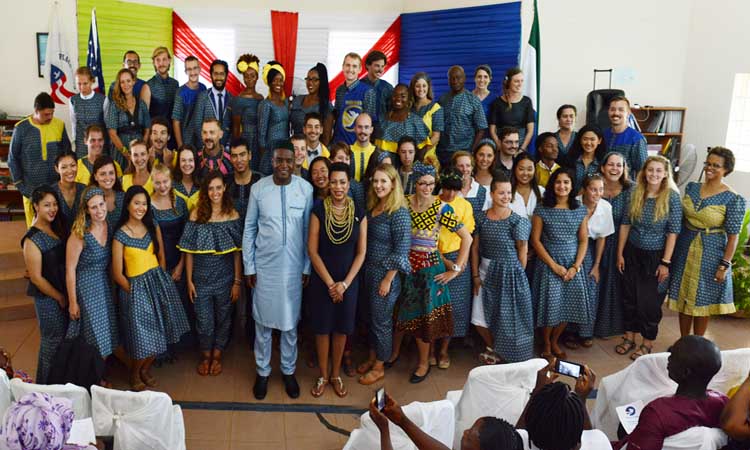 I am truly honored to be in Port Loko this morning on behalf of the United States Mission to Sierra Leone on the occasion of the swearing in of these amazing Peace Corps volunteers.  Today we celebrate the long and noble history of Peace Corps partnership in Sierra Leone as we welcome these volunteers into service.  I know that each of them will carry on the fine tradition of service, using their ingenuity, creativity, and grit to make an impact on communities alongside host country partners. Each Peace Corps volunteer is unique, and so is his or her service, but this shared passion to make a difference is one of the hallmarks of the Peace Corps.

I want to begin by thanking and acknowledging the strong partnership with the government of Sierra Leone both nationally and at the district and local levels.  I particularly want to thank the Ministries of Education and Health for their partnership and the Port Loko District Council for working with us on establishing and maintaining this lovely training site.

I would also like to thank the host families who have opened their homes and hearts to our trainees and welcomed them so warmly into Sierra Leone.  The training of volunteers would not be possible without your support.

I also want to thank the Peace Corps administrative staff that we are so proud to have as part of the U.S. Mission in Sierra Leone.  I know that this team has worked very, very hard in preparing for this day and we are here this morning with new volunteers because of your dedication.  Let’s all give a well-deserved round of applause to this extraordinary team!

When the Peace Corps was launched in 1961 by President John F. Kennedy, it was a bold new social experiment. Responding to intensified economic, political social, and cultural relations—what we now call globalization—the Peace Corps was designed to enhance world peace, friendship, and global development through volunteer service.  Kennedy’s famous challenge and call to service represents an American ideal that has struck a chord with generation after generation.  Since President John F. Kennedy established the Peace Corps in 1961, it has become of America’s best public service institutions, and more than 220,000 Americans have responded to the Peace Corp challenge to serve.

Here in Sierra Leone, Peace Corps has had volunteers since 1962 with breaks in service during the civil war and then again during the Ebola crisis.  Over that time, more than 3,600 Peace Corps volunteers have served in Sierra Leone. Like Sierra Leone, the U.S. Mission has been “building back better” our Peace Corps reserves since the Ebola crisis ended.  Since reopening, Peace Corps has expanded its educational focus to also include health with volunteers in 12 districts.  Peace Corps continues to grow the number of volunteers from 15 in 2016, to 44 in 2017, and now 55 in 2018.  In addition to increasing the number of volunteers, Peace Corps is also hiring and training additional Sierra Leonean staff to align with President Bio’s vision to expand educational and training opportunities for Sierra Leonean citizens.  Moreover, this lovely training facility, which Peace Corp renovated to include electricity, latrines, and water, will be donated to the Port Loco community within five years.  The facility will be administered by a fully trained and capable programming officer to run community programs to build upon the wonderful momentum that we are celebrating today.

I stand in awe of all Peace Corps volunteers and staff members because your service represents one of the best things about humanity – you connect with other humans across cultural differences while tackling the most pressing challenges of our generation.  As you educate and improve health standards in Sierra Leone, you will also inspire and transform those you meet now and in the future. And let’s not forget that you yourselves will be forever changed by the experience.   Please give yourselves a round of applause for being brave enough to accept Kennedy’s call to service, and to venture outside of your comfort zones.

[Pause for round of applause]

Now you too are part of the movement that President Kennedy sparked over 50 years ago.

Now, down to business of this occasion.  Today, maybe more than ever, Peace Corps continues to play an important role on the world stage.  Nearly 7,000 volunteers are spread across the globe in 63 countries and are volunteering in education, health, youth development and agriculture.  We are very fortunate to have these 55 new volunteers in Sierra Leone to focus on secondary education and teaching science, technology, engineering and math and literacy and in health focusing on water, sanitation and hygiene – skills that are vital to Sierra Leone in advancing its economic and human development goals.

I look forward to celebrating the accomplishments of the students and communities you will be serving. Who knows?  Your service may touch the life of a future parliamentarian, Minister, entrepreneur, President or scientist. What is certain is that your service will contribute to the advancement of Sierra Leone and promote a better understanding of America in Sierra Leone.

In closing, I think you would agree that President Kennedy’s bold experiment has proven to be a worldwide success with a long history of accomplishment here in Sierra Leone.  Peace Corps 2018 is even more vibrant than it was in its early days and remains a shining example of our collective spirit of collaboration, of mutual understanding and tolerance, of service, of resilience, of seeing the best in others and looking to a brighter future.  I believe that is what President Kennedy had in mind in 1961 when he launched this great program – this is what we celebrate today.

In that spirit, let’s swear in these volunteers!

I, state your name, do solemnly affirm that I will support and defend the Constitution of the United States against all enemies, foreign and domestic; that I will bear true faith and allegiance to the same; that I take this obligation freely, without any mental reservation or purpose of evasion; and that I will well and faithfully discharge the duties of the office on which I am about to enter.  So help me God.

Ladies and gentlemen, please join me in welcoming these new Peace Corps volunteers into service!