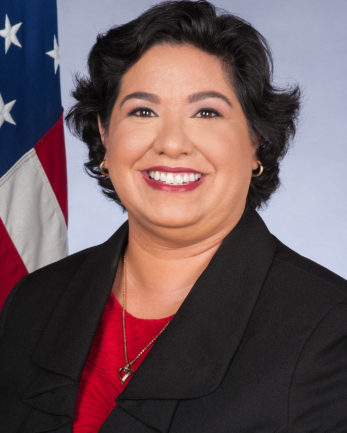 She most recently served as Deputy Director of the Career Development and Assignments division of the Department of State’s Bureau of Human Resources (2016-2017). Prior to that position, she was the Deputy Chief of Mission of the US. Embassy in Nigeria (2013-2016). Previously she served as: Deputy Executive Director of the Bureau of African Affairs; Management Officer in Islamabad, Pakistan; in Colombo, Sri Lanka; and in Mumbai, India. She has also served as a Special Assistant for the Bureau of Administration and the Under Secretary for Management, and served in the Office of Allowances. She began her Foreign Service career in Lagos, Nigeria, and served her second tour in Freetown, Sierra Leone.

In 2010, Maria received a Master of Science degree in National Resource Strategy at the National Defense University’s Industrial College of the Armed Forces. She holds a B.A. in Spanish and International Economics from Valparaiso University in Indiana. She is married with one daughter.