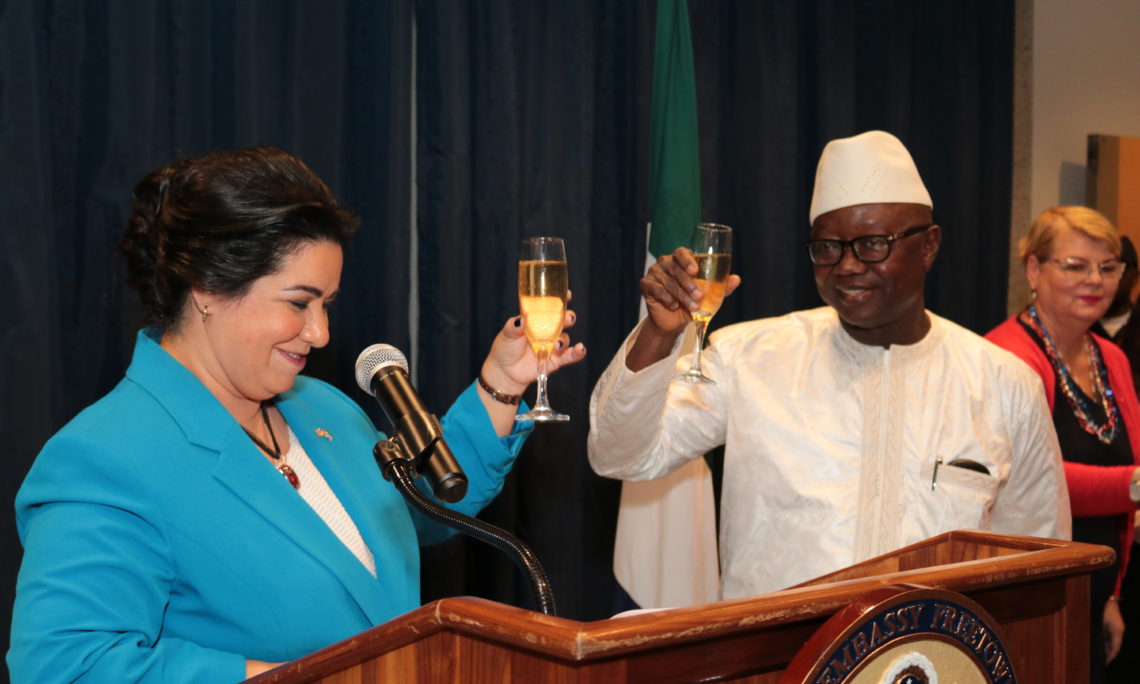 At the U.S. Embassy in Sierra Leone, we commemorated the 243rd anniversary of our Independence Day last week with guests from government, civil society, business, media, academia, and the arts. Honorable Alhaji Kanja Sesay, Minister of Energy, & Acting Minister of Foreign Affairs and International Cooperation charmed the room with a speech and a toast to our enduring friendship! Thanks to all who worked hard to make this night happen, including our wonderful sponsors and all the staff.

Today we commemorate the signing of the Declaration of Independence, on July 4, 1776.  With this declaration, our founders stated the central tenets of the United States of America: that we are all created equal, that we are all endowed with certain inalienable rights, and that among these rights are life, liberty, and the pursuit of happiness.  Throughout the years, we have sought to live up to these ideals.

In our relationship with Sierra Leone, as with other nations, we hope to see these ideals likewise reflected.  We believe that lasting stability, prosperity, transparent governance, and security in Sierra Leone ultimately leads to a more peaceful and prosperous world.  In the most recent iteration of our Africa Strategy, the U.S. government listed as our top priority advancing U.S. trade and commercial ties.  We want our economic partners in Africa to thrive, prosper, and ultimately enjoy economic independence. We are encouraging African leaders to choose sustainable foreign investments that help states become self-reliant.

To that end, I was pleased to travel to the U.S. in March, when President Bio visited Harvard and MIT in Boston and then Washington, DC.  We facilitated meetings with senior leaders, policymakers, and investors to advance our number one policy goal of expanding U.S. investment and trade with Sierra Leone.  Our efforts are yielding results, and we look forward to continued success, for the benefit of both our countries.

Our two nations – the United States and Sierra Leone – are united by history, by common values, and by our commitment to democracy.  Let us further be united by a spirit of outreach, to ensure that all citizens are able to share equally in these fruits of democracy, peace, and development.  The United States of America will be a strong partner to Sierra Leone as we both chart our futures together.  I look forward to continuing this relationship to the benefit of both our great nations.

Please join me in raising a glass to toast the anniversary of our Declaration of Independence and the continued close partnership of the United States of America and the Republic of Sierra Leone.

Long live the friendship between the United States of America and the Republic of Sierra Leone.