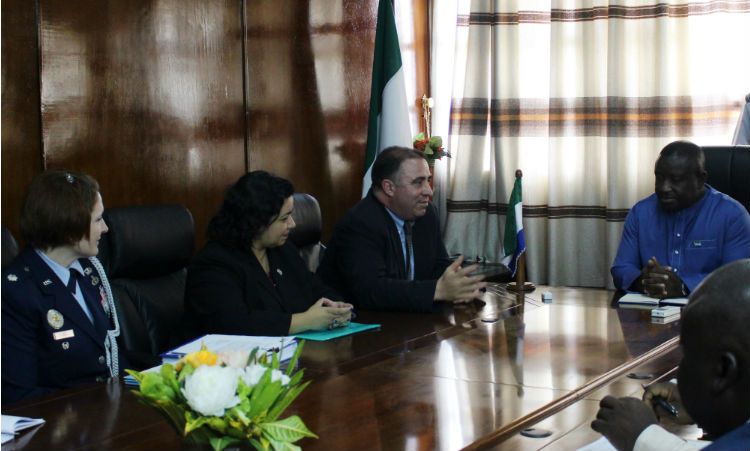 U.S. Ambassador Alexander Laskaris, the Deputy Commander for Civil-Military Engagement at United States Africa Command (AFRICOM), held high-level meetings in Freetown yesterday as part of a series of engagements across West Africa. At the pinnacle of the visit, Ambassador Laskaris, along with the U.S. Ambassador to Sierra Leone, Maria Brewer, met with His Excellency the President Brigadier (rtd) Julius Maada Bio to discuss key military, economic, and security related issues.

Another fruitful discussion for the delegation involved the desire for Sierra Leone’s military to return to Peacekeeping Operations. The U.S. Ambassadors stressed the need for Sierra Leone to focus on its force’s professional development and welfare in order to prepare a peacekeepers that are disciplined, well-trained, and have strong leadership. In speaking with the new Deputy Minister of Defense, Brigadier (rtd) Simeon Sheriff, the U.S. delegation also offered to assist Sierra Leone in seeking out sound, economically viable options for training, equipping, and sustaining prospective peacekeeping forces.

At the conclusion of his visit, Ambassador Laskaris commented that he was impressed to see how well the democratic process is working in Sierra Leone and congratulated the country for its successful elections and subsequent peaceful transfer of power. The delegation appreciated the opportunity to meet with His Excellency and reiterated that the United States looks forward to its continued partnership with the government and people of Sierra Leone.