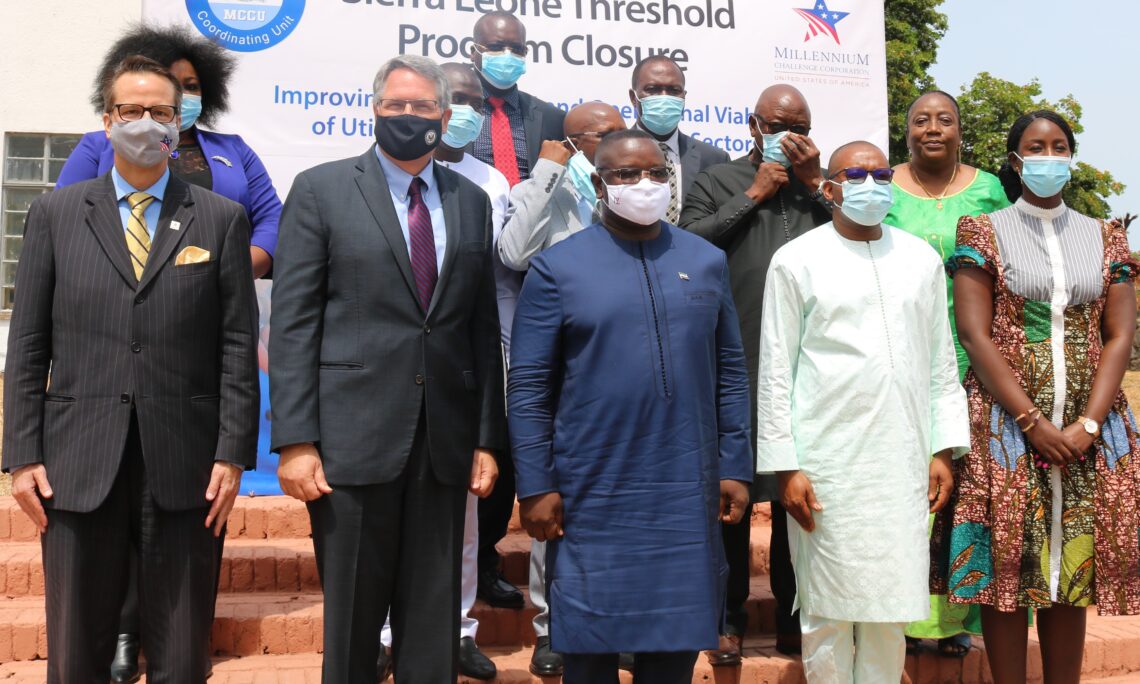 Freetown, Sierra Leone – In a ceremony at the State House, President Julius Maada Bio extended his “profound appreciation to the leadership of the Millennium Challenge Corporation (MCC) in the United States and in Sierra Leone,” for the fruitful collaboration over the length of the five-year Millennium Challenge Corporation (MCC) Threshold program which focused on development of the energy and water sectors.  The ceremony featured remarks from President Bio as well as U.S. Ambassador David Reimer, MCC Resident Threshold Director Matt Langhenry, Vice President Mohammed Juldeh Jalloh who served as Chairman of the MCCU Board of Directors, and CEO of the Millennium Challenge Coordinating Unit (MCCU), Ndeye Koroma.

“The twin challenges of reliable access to energy and clean water services have constrained progress and opportunities for Freetown and the nation,” noted Ambassador Reimer.  “Through the $44 million-dollar MCC threshold agreement, we have made tangible progress in confronting these challenges in Freetown.  The Threshold program improved access to safe water in Aberdeen and KingTom, building kiosks in areas that hadn’t had easy access to water in more than a decade.  The program also improved the operational and planning capacities of utilities in the power sector and laid the groundwork to increase access to power throughout Freetown and Sierra Leone.”

The threshold program drove institutional reforms and invested in critical infrastructure to improve the water and electricity sectors and encourage sustainable economic growth in Freetown and the nation.  In addition to building 10 water kiosks, the threshold program mapped Freetown’s water network and installed new water pipes to improve sanitation and hygiene services.  The nation’s first-ever national water sector roadmap was also established as part of the program, providing a blueprint to extend water, sanitation, and hygiene services in cities and district headquarter towns by 2023, and with the goal of reaching all urban areas by 2030.

In the electricity sector, a new enterprise geographic information system (GIS) created the first customer database and map of network assets to improve the commercial and technical operations of the electricity distribution utility.  And a new electricity sector roadmap, integrated resource plan, and private investment policy will allow the government to plan more effectively for the country’s long-term energy needs and encourage private sector investment.

MCC Acting CEO Mahmoud Bah, speaking via video message, told the audience: “I want to congratulate the people of Sierra Leone for the successful completion of the MCC – Sierra Leone threshold program.  I want to thank President Julius Maada Bio and Vice President Dr. Mohammed Juldeh Jalloh for your leadership and support.  Your commitment to this program has been critical for its success….  I am very excited that in December of 2020 MCC’s Board of Directors selected Sierra Leone for a larger grant, called a compact.  I look forward to the day we sign this compact for the people of Sierra Leone.”