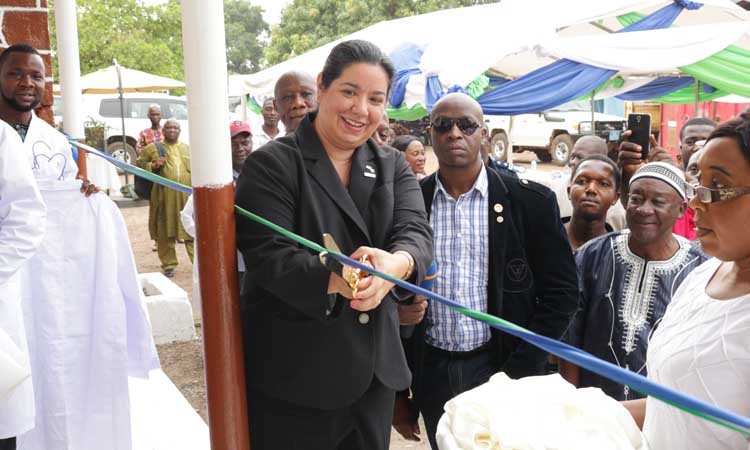 On Friday 12 April 2019, the U.S. Ambassador to Sierra Leone, Maria E. Brewer, gave remarks at the official opening of Sierra Leone’s first Vector-borne Disease Insectary and Laboratory (VDIL) in a ribbon-cutting ceremony officiated by the Honorable Minister of Health, Professor Alpha T. Wurie. VDIL was developed with the support of the United States Government through the U.S. President’s Malaria Initiative (PMI) program. VDIL will provide the Ministry of Health and Sanitation (MOHS) with vital information to make informed decision on suitable mosquito control interventions for Sierra Leone. The U.S. Ambassador, Maria Brewer in her statement commended the good partnership and continued collaboration between the U.S. Government and the Sierra Leone MOHS.

Malaria remains one of the biggest health threats to Sierra Leone citizens. To collaborate efforts with the Government of Sierra Leone to combat this deadly yet preventable disease, the U.S. government first announced Sierra Leone as a new PMI country in 2017. Through USAID and CDC, together with implementing partners such as Vectorlink, the U.S. Government provides 15 million U.S. dollars annually for malaria control activities in Sierra Leone.

This new insectary will enable MOHS to understand, the habits of mosquitoes, their malaria transmission dynamics and which type of insecticides kill mosquitoes that carry malaria. This information will be used for developing effective strategies in vector control management and the protection of the population against vector borne diseases.

In her concluding remarks, Ambassador Brewer added that this investment will save the lives of Sierra Leoneans through more effective prevention of malaria.