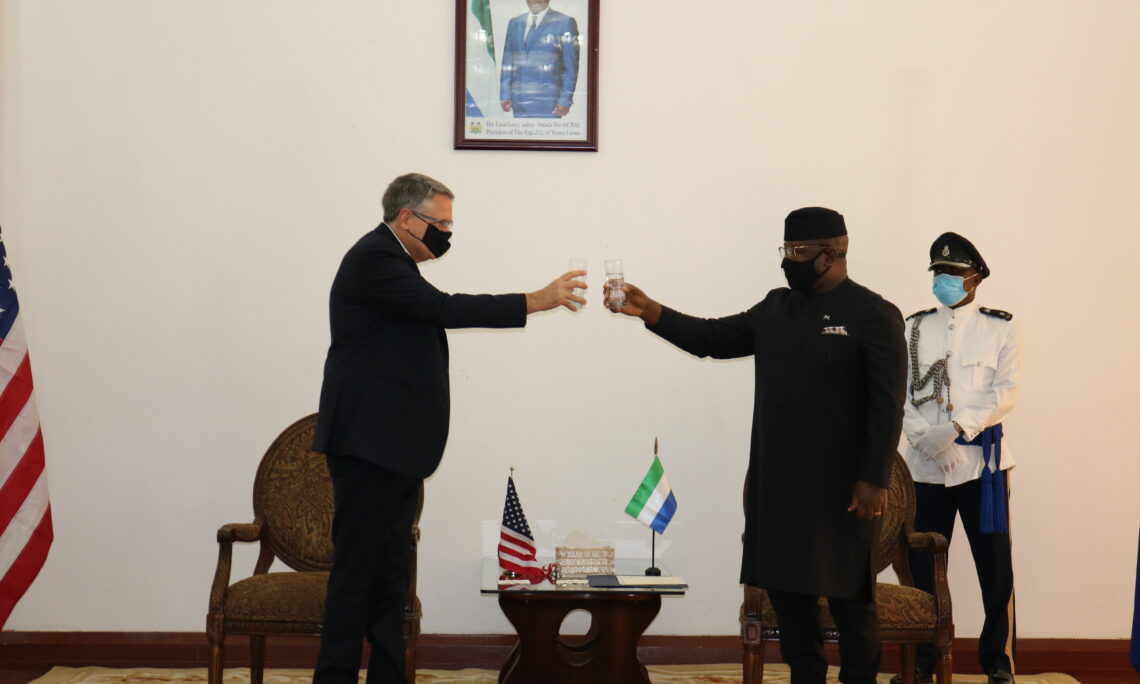 Freetown, Sierra Leone – On Wednesday, March 24, David D. Reimer, United States Ambassador Extraordinary and Plenipotentiary to the Republic of Sierra Leone presented his official letter of credence to President Julius Maada Bio at a credentialling ceremony at the State House.  Newly arrived ambassadors from Egypt and The Gambia were also credentialed.

“I thank His Excellency President Julius Maada Bio for his kind welcome,” stated Ambassador Reimer.  “The deep friendship between the United States and Sierra Leone is built upon centuries of familial, cultural, economic, and political ties.  We are bound together through shared values of democracy, respect for the rule of law and citizen participation.  These values are the fertile ground in which we can cultivate our collaboration on a multitude of issues.”

Ambassador Reimer arrived in Sierra Leone on Monday, March 8 to take up his position as Chief of Mission of the U.S. Embassy in Freetown.  Previously, he served as Ambassador to Mauritius and the Seychelles and as Director of the Office of West African Affairs for the U.S. State Department.  Ambassador Reimer is a career member of the Senior Foreign Service and has also served in Mauritania; Iraq; Switzerland; Haiti; Italy; Germany; and Belize.  He joined the State Department as a foreign service officer in 1991 and speaks French, Italian and German.

Ambassador Reimer stressed the United States’ unwavering support as Sierra Leone confronts health challenges like the COVID-19 pandemic.  “Through the U.S. Agency for International Development, U.S. Centers for Disease Control and Prevention, and the Health Resources and Services Administration, we have supported the health infrastructure of Sierra Leone as it responds to longstanding challenges like malaria, HIV, infectious disease outbreaks, and the provision of basic primary care to all.  The American people will continue to support you through vaccines, supplies, expert personnel, and training, as you respond to the challenge of COVID-19 now and in the future,” he stated.

Ambassador Reimer also addressed the United States’ cooperation on economic issues.  “The United States remains committed to building a more prosperous and peaceful future in partnership with Sierra Leone,” he stated.  “Through grants, technical assistance, and partnerships we have worked to improve the investment climate for U.S. and foreign businesses, which will contribute to Sierra Leone’s private sector growth and development.  Sierra Leone’s selection in December for a multimillion-dollar Millennium Challenge Corporation compact agreement is one element of our commitment and follows on the heels of the successful $44.4 million threshold program which brought improvements in the energy and water sectors in Freetown.”

“I congratulate the Ambassadors of Egypt and The Gambia who were also credentialed today,” stated Reimer.  “I am delighted to be here in Freetown and I look forward to working with the government and the people of Sierra Leone as we build a more peaceful, prosperous and democratic world together.”