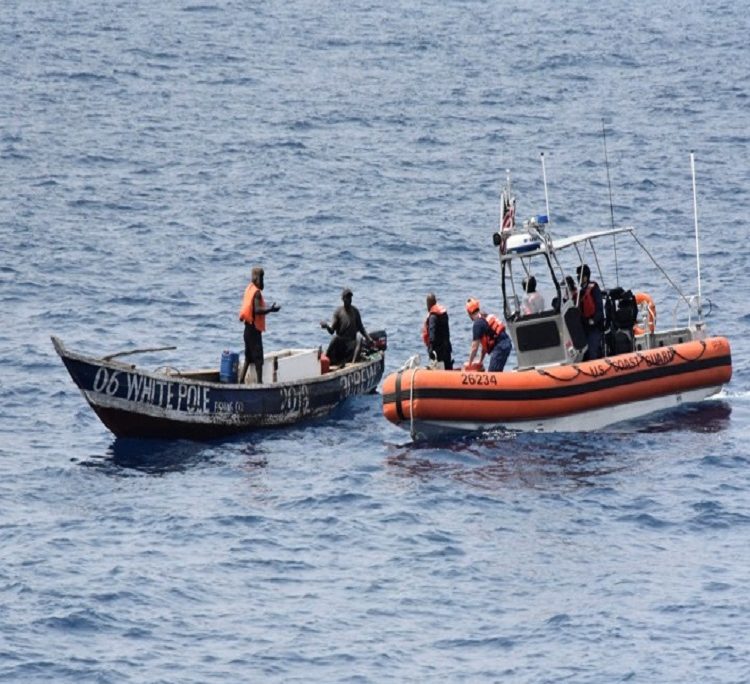 GULF OF GUINEA — The U.S. Coast Guard Vessel called the “Thetis” (WMEC-910) conducted a rescue-at-sea of two fishermen, who were presumed dead, approximately 40 miles south of Sierra Leone in the Gulf of Guinea, March 14, 2019.

Watchstanders aboard Thetis spotted a 22-foot (6.7-meter) fishing vessel adrift with two people who appeared to be in distress and quickly proceeded to the vessel to render assistance.

The rescued fishermen had been lost at sea for three days and had run out of food, water, and fuel. They were presumed dead by local authorities on March 12.

“The U.S. Coast Guard is known throughout the world as a rescue service,” said Cmdr. Randall Chong, commanding officer aboard Thetis. “Today, we did just that. My crew did an amazing job in spotting the distressed vessel, rendering assistance, and working with the Sierra Leone Maritime Authority to bring them back home alive safely.”

Coast Guardsmen aboard Thetis provided food, water, and fuel to the fishermen once on scene and safely transferred the fishermen and their vessel to the Sierra Leone Maritime Authority to be brought ashore.

The Thetis crew is operating in the U.S. 6th Fleet area of operations in support of exercise Obangame Express 2019. The crew will be working with multiple African maritime partner agencies to conduct joint maritime law enforcement operations such as fisheries, drug interdictions, and marine pollution prevention and response.

U.S. 6th Fleet, headquartered in Naples, Italy, conducts the full spectrum of joint and naval operations, often in concern with allied, and interagency partners, in order to advance U.S. national interests and security and stability in Europe and Africa.