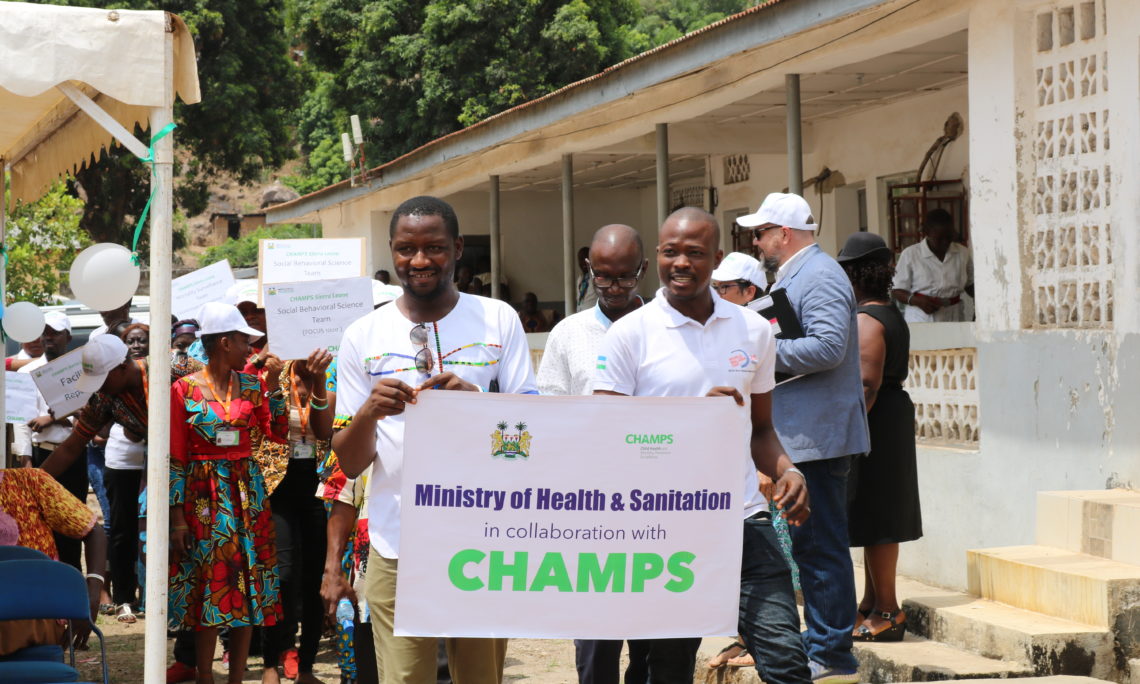 U.S. Embassy Representative Mr. Carlton Philadelphia opened a new CHAMPS (Child Health and Mortality Prevention Surveillance) Office on the grounds of the District Health Management Team and broke the ground for a new Regional Hospital Laboratory in Makeni. The U.S. Centers for Disease Control and Prevention (www.CDC.gov) have provided technical leadership to CHAMPS since its inception in Sierra Leone, and have funded the project during the initial 2 years with $800,000 direct program and $2,500,000 in kind support. The CHAMPS network is funded by the Bill and Melinda Gates Foundation (BMGF) and led by Emory University in Atlanta, Georgia. Under the leadership of the Ministry of Health and Sanitation (MoHS) and U.S. CDC, Sierra Leone officially became the 7th network country in January 2018. Other sites are in Bangladesh, Ethiopia, Kenya, Mali, Mozambique and South Africa. Emory University recently received funding from BMGF to continue CHAMPS for an additional 6 years.

The new CHAMPS Office and Regional Hospital Laboratory in Makeni are an example of a successful public-private partnership between the U.S. CDC Sierra Leone Country Office and the CDC Foundation. The partnership was made possible through generous donations of $850,000 from the BMGF for the office building and $500,000 from Mark Zuckerberg and Dr. Priscilla Chan through the Silicon Valley Community Foundation for the laboratory. These investments were made to build on the work that occurred during the Ebola response by strengthening public health systems in Sierra Leone for the long term, ensuring better preparedness, response capabilities and health for the people of Sierra Leone. In close collaboration with the Ministry of Health and Sanitation and the U.S. CDC Office Sierra Leone, the CDC Foundation engaged a multidisciplinary team to design the new laboratory structure. The new building will meet the requirements of a modern clinical services laboratory for the region and will be the location for CHAMPS diagnostics. CHAMPS will continue to contribute to capacity building and clinical services at the laboratory.

The CDC Foundation is a US-based non-governmental organization that works with partners and donors to support and extend the U.S. Centers for Disease Control and Prevention’s lifesaving work around the world.  Since 2014, the CDC Foundation, CDC and the Sierra Leone Ministry of Health and Sanitation have worked as partners to combat the Ebola outbreak as well as strengthen public health systems throughout the country.  CDC Foundation donors provided $56 million for the Ebola response, which primarily was spent in Guinea, Liberia and Sierra Leone for a wide variety of critical efforts that helped to stem the tide of Ebola and help strengthen systems after the end of the outbreak.

Advanced sampling and laboratory methods are essential components of CHAMPS activities. The project will play a long-term role in reducing child mortality in the country, which is currently one of the highest in the world. The Sierra Leone CHAMPS site is located in Makeni City and surrounding rural areas in Bombali District (Bombali Sebora and Bombali Siari Chiefdoms). The site has implemented a system of death notifications based on alerts from the 117-call system. In addition to laboratory testing, the CHAMPS team is collecting information from medical records and conducts an interview with caregivers about the circumstances of the child’s death. A panel of medical experts will meet regularly to determine the cause of death based on internationally accepted criteria. It is imperative for the CHAMPS network to use the results for development of policies and effective interventions to improve child health and reduce child mortality at community, national, and international levels.

Mr. Philadelphia said that the US Government is proud to have funded CHAMPS in Sierra Leone during the startup period of the first 2 years and has provided leadership and technical expertise through the CDC. He particularly welcomed the leadership that the Ministry of Health and Sanitation has demonstrated in establishing the CHAMPS site and ensuring it is their own and serving the critical need to reduce maternal and child mortality. Dr. Jambai, the Acting Chief Medical Officer and CHAMPS co-director, said that the project exemplifies partnership at its optimal level and “I’m proud to associate myself with this endeavor.” Following the ribbon cutting guests had the opportunity to tour the CHAMPS building and learn about different steps in the CHAMPS workflow. The event finished with the Deputy Minister’s groundbreaking for the new laboratory at the Regional Hospital. Construction of the new laboratory will take approximately 6 months.

The U.S. CDC Office in Sierra Leone was established in 2015 during CDC’s support to the nation’s Ebola response. CDC works closely with Sierra Leone through the Global Health Security Agenda (GHSA), focusing on strengthening public health laboratories, disease surveillance, emergency management, and workforce capacity to prevent, detect, and respond to disease outbreaks, as well as through the U.S. President’s Malaria Initiative and the U.S. President’s Emergency Plan for AIDS Relief (PEPFAR).