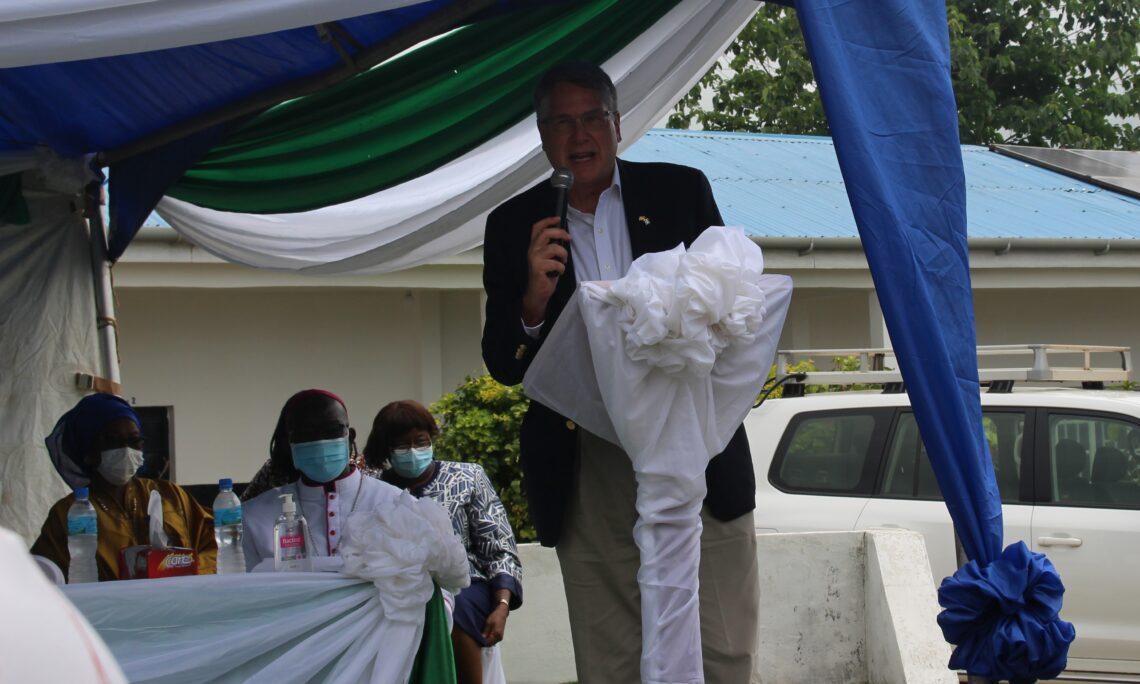 Bo, Sierra Leone- United States Ambassador David Reimer, along with Dr. Austin Demby, Minister of Health, and Dr. Alpha T. Wurie, Minister of Education, commissioned a new skills lab at the School of Midwifery (SOMBO) in Bo. The lab will provide simulation-based education and training as a complement to traditional forms of training, allowing students to gain experience managing rare yet life-threatening events such as post-partum hemorrhage, pre-eclampsia, and birth asphyxia.

“Thanks to the efforts of the Sierra Leone government, the country has made strides to reduce the terrible toll of maternal mortality,” stated Ambassador Reimer.  “With a significant expansion in the number of trained midwives, and improvements to midwifery education, funded by the United States, Sierra Leone has seen a 40% decline in maternal mortality.  I congratulate you on this progress and urge you to continue your efforts to save mothers and babies in childbirth.”

The renovations, procurement and installation of equipment, training, policy development, and integration of skills-based learning into the curriculum was funded and carried out by the U.S. Health Resources & Services Administration (HRSA) with support from the U.S. President’s Emergency Plan for AIDS Relief (PEPFAR).  This project at SOMBO is part of HRSA’s Resilient and Responsive Health Systems Initiative – a 5-year, $10.5 million grant which aims to achieve improved maternal health and HIV outcomes through strengthened midwifery education.  The program has previously funded skills labs, libraries and computer labs at the National School of Midwifery in Freetown, School of Midwifery Makeni, and Faculty of Nursing at the University of Sierra Leone.  A fifth skills lab at Eastern Polytechnic in Kenema was also commissioned on Thursday.

Celebrating the substantial reduction in maternal deaths, Minister Demby stated that “717 deaths in 100,000 is still too high.” Addressing the student midwives, he said: “One of the main ingredients in solving this problem is having competent, well-trained, empowered midwives. What you are doing today is getting all those skills in place so that when you are confronted with that twin, that triplet, that single baby, you are prepared.”

The School of Midwifery Bo (SOMBO) is an institution established in 2017 by the Ministry of Health and Sanitation (MoHS).  Since its inception in 2017, the school has enrolled 164 students and graduated 99 midwives deployed by MOHS in various districts.  The school trains State Certified Midwives (SCM), which is a two (2) year program to upgrade State Enrolled Community Health Nurses (SECHN) to the SCM certification.

Midwifery training programs aim to produce competent and multi-skilled midwives who will in turn provide high quality and safe reproductive services to pregnant women, the unborn child, and neonate, throughout pregnancy, through childbirth, and the postnatal period, in any setting.  In addition to the basic theoretical instruction received in the classroom, students receive clinical instructions in the clinical lab and practice settings in maternity units.

In addition to the ribbon cutting ceremony, the Ambassador viewed a presentation on the importance of skills-based education and training from Dr. Joan Shepherd, principal of the National School of Midwifery, and a demonstration of high-fidelity training mannequins.