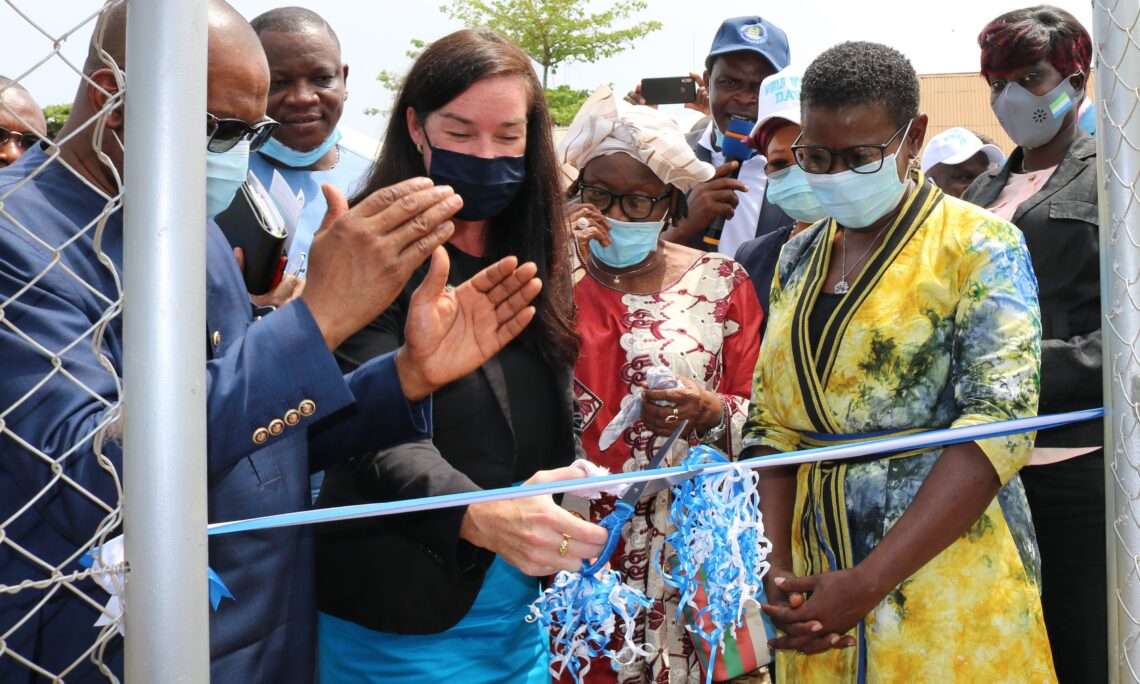 Freetown, Sierra Leone –  Vice President Mohammed Juldeh Jalloh celebrated the formal handover of 10 water kiosks, funded by the Millennium Challenge Corporation threshold program, to the Guma Valley Water Company at a ceremony on Monday in KingTom.  The Vice President, along with the U.S. Embassy Deputy Chief of Mission, the Deputy Minister of Water Resources, the Mayor of Freetown, and other dignitaries also toured the KingTom water kiosk, which provides a safe and reliable collection point for families to access clean water.

Vice President Jalloh welcomed the water kiosks and the benefits they provide for communities like KingTom: “I want to use the opportunity to thank the United States government,” he stated.  “Through the threshold program we have been able to demonstrate practically that we can deliver safe drinking, and affordable water to our people, and more importantly, showcase what you can do when you strengthen the institutions of essential service delivery outlets.”

The U.S. government, through the Millennium Challenge Corporation Threshold Program, invested $44.4 million dollars to strengthen the energy and water sectors in the greater Freetown area.  “These critical investments drive progress across many development areas,” stated U.S. Embassy Deputy Chief of Mission Elaine French.  “Reliable water and electricity are essential not just for economic growth, but also the provision of education and healthcare.  They fuel a robust, healthy, and productive society.”

“Water is life, and is so fundamental to the success of businesses, to livelihoods, to the wellbeing of children, to health and sanitation,” noted Yvonne Aki-Sawyerr, the Mayor of Freetown.  This project “has been described as a pilot, as a demonstration.  And that is precisely what it has done for us at Freetown City Council.  It has demonstrated what is possible….  We are inspired at City Council.  We want to see many more of these and we are ready to work with stakeholders to ensure that we roll more of them out.”

Following the handover ceremony, Vice President Jalloh, Mayor Aki-Sawyerr, DCM French and other dignitaries toured the kiosk facility which will be managed by the Guma Valley Water Company through a public-private partnership operator.  In addition to the 10 community water collection kiosks, 1,103 households and 143 businesses were supplied with direct water hookups through the program.

The MCC Sierra Leone Threshold Program, which is due to end on March 31, made significant improvements in both the water and energy sectors during its five- year lifecycle.  In December 2020, Sierra Leone was selected to develop a full MCC compact program—a multimillion dollar grant agreement which represents the next stage of collaboration with the United States’ Millennium Challenge Corporation.